s
HomeTechnologyNintendo Switch R4 Card: Which To Buy To Crack The Console Switch? 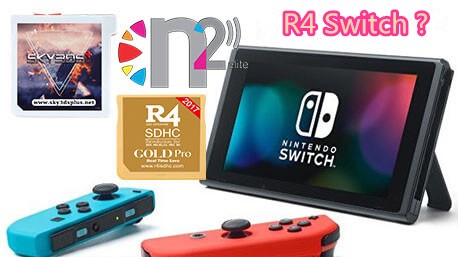 We have a lot of r4 cards that work on the Nintendo DS, DSi or 3DS, but do you know a functional R4 card on Nintendo Switch? And is there a flashcart compatible with Nintendo Switch? An SX Pro flashcart can hack Nintendo Switch to play free games but it allows cheat in games? or launch the emulators or homebrews like what can be done on a 3DS CFW? You will have the correct answers below.

A r4 switch card available at the market?

The R4 3DS card such as r4i sdhc 3ds rts allows you to play free DS games as well as launch homebrews, emulators, emunand, cheat code etc. on the 3DS console 11.9 or lower. So can you find an R4 card for Nintendo Switch? Absolutely not ! The console Nintendo Switch was released last year is a new console, it has been cracked this year by the flashcart SX Pro instead of an old R4 card group like r4isdhc.com or r4ids.cn etc.

On the other hand, the sx pro card still works like the r4 3ds, it also supports downloaded games from Switch, and homebrew, CFW, emulators, emunand and even cheating on Nintendo Switch, including the latest firmware version 8.0.1.

So you can take a pro sx like r4 card for your Nintendo Switch!

The R4 gold card is a known brand in the R4 3DS group because it is well built and versatile to crack the 3DS or DS, DSi. There are many types of R4i gold,

So can a r4i gold pro work on Nintendo Switch?

The answer is neither! R4i gold is also an R4 card, it only works to run DS games and GBA / SNES emulators, of course it still supports multimedia, and especially r4i gold allows you to install CFW Luma on the 3DS, thanks to its ntrboothax compatibility, but it does not work on Nintendo Switch. If you want to hack the Switch with a flashcart, the sx pro is the only choice. Because the sx pro also allows to use CFW on Nintendo Switch, and what is more important is its CFW SX OS is pre-installed on sx pro, you just have to activate it, and you do not bother to install the hack with the complex manipulation!

FYI, a dongle is a tool similar to a USB key with the objective to inject the payload on the firmware Switch then launch a CFW below. It’s a trick dedicated to jailbreak. So the dongle r4s will be a good choice to crack the Switch console? No either! This is a dongle of the r4i sdhc.com team that has a lot of r4 models, so it’s more a specialized group in the 3DS hack scene, for hack Nintendo Switch, r4s dongle can inject payloads only, you have to download them yourself from the net then install the corresponding CFW, in case of recklessness, you could brick your console Switch!

We mentioned several the sx pro flashcart in the blog, so how can a sx pro hack the Nintendo Switch? The origin is hardware used on NX. The exploit – hacking that exploits a fault – which was allowed not by the software of the console, but because of its chip Nvidia Tegra X1. Thus, it is possible, via a USB boot, to run other OS (such as Linux) or access other applications normally inaccessible on the console.

For Team Xecuter, the manufacturer of the SX Pro flashcart, it takes advantage of a dongle inserted in the USB port of the Switch and a two-pin JoyCon short-circuit slider right, then press the volume and power keys to start in RCM mode. Thus launches the CFW.

N2 Elite is an NFC toy emulator that currently supports ALL existing Amiibo action figures. It allows you to “emulate” an Amiibo figurine by backing up and restoring the data on their own multi-slot NFC disk. It can imitate up to 200 Amiibo figurines. It provides a ton of value considering the price of Amiibo figures and the rarity of certain characters.

To transfer your amiibos, an Android application is available and requires an NFC-enabled Android smartphone. If you do not have a compatible smartphone, do not worry, the N2 Elite USB Drive is also available to transfer your friend from a computer.

The N2 Elite is really the easiest way to save your Amiibos for scanning on the go or for a souvenir.