All of us are familiar with the word screenshot. I am sure that there might not be any person who is unknown to it. A screenshot is not only restricted to being used on a mobile phone. You can easily record your screen on devices like laptop, computer, mac book, and other devices like these. Screen recording is not only restricted to recording movies or entertainment videos. This feature has other benefits too.

We are specifically talking about several software of screen recording for windows here that offer functions that a screenshot extension tool might never offer. Many have been launched for it. We have discussed some free and paid software for windows below.

All of us are aware of the fact that nothing is free in this world. If someone is ready to pay for a good or service so either it is expensive or doesn’t provide the quality a customer needs. Many software has been launched in the past few years. Some of them are launched for screen recording in windows. The one that is preferred by most people is the one that has several efficient features for screen recording in it. Anyone who is looking for any such software then shareX is the software they should go for. This software has hotkeys to navigate quickly with an additional feature of adding your custom watermarks. You can easily record the full screen through it. Beneficial for developers. A person who uses it for normal screen recording might get lost in its excessive features.

All of us are aware of what screen recording is. We know that screen recording involves the action of creating a copy in a video form of whatever is there on the screen. These are the normal features that every screen recording application and software offers. But have you ever heard of editing and sending the video or picture that you recorded from your screen, within minutes? You are missing something very cool if you never go through this feature. Tiny take is a screen recording software that introduced people to this feature. This software allows you to record your screen, then edit it the way you want and share it directly with whom you want to. You don’t need to wait for every 5 minutes in between capturing, saving, editing, and sending.

You must have noticed that all the products have their company’s name printed on the product and many times you feel like removing it from the product because it doesn’t look good on it. Just like that only the software that you use attaches their watermark on the file, you have generated from their software and honestly, the majority of us don’t like it. Free cam is also one of the software for windows that allows you to screen record without adding its watermark on the file generated. This software comes with a built-in audio and video editor. It also provides high resolution and reduces the background noise that might come while you are screen recording. You also don’t have to worry about any advertisements that might hinder you while you are recording something on your windows. 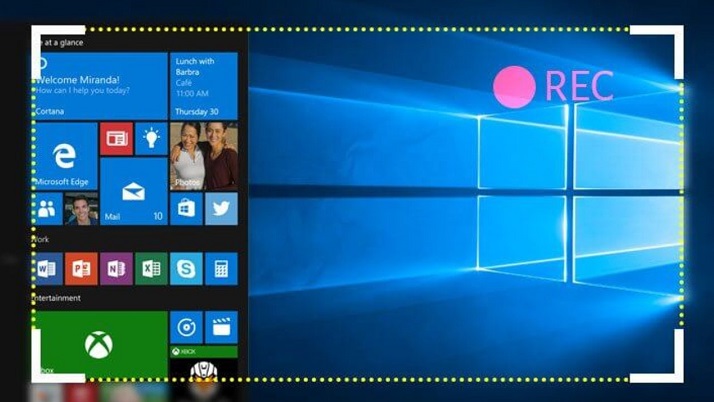 Where are the gamers? I am talking with them here specifically. Gamers often face the issue of their game getting lagged or the screen recording getting disturbed in between. This happens because of two reasons. One is not having an efficient device and the second one is the screen recorder not able to record the fast-paced screens. A software used for recording screens for windows was launched a few years ago to easily record fast paced screens. This proved to be a savior for the gamers and helped them recording their games and doing live streams easily. You can record simultaneously from your computer and device camera at the same time. You should install this software and explore its features in-depth.

When you go to a shop to buy anything or you hire any service you see many people buying the same product or getting the same repairing service you need. But is it necessary that you and the person standing next to you have the same amount of use as yours? The answer is no of course. Everyone has a different amount of usage attached to each product. Keeping this concept in mind, a software to record the data present on your screens was launched for windows to be used by the people who have minimal need to screen record stuff. Cam studio is the one I am talking about. This software doesn’t take much of your device storage and this is the reason why it is called lightweight software. Go and get this app for your windows immediately and capture whatever things you want to without being tensed about the quality of the output video produced or the size of it.

Are you bored of using the same old software for screen recording that has the mainstream features with no added feature? Then you should try Camtasia. This software comes with added and exciting features. I will talk about each feature one by one. The first one is that it comes with an exciting feature of adding thoughtful videos and quizzes in between the screen recorded videos. The second one is that it allows you to capture every kind of media either in audio or video form. The third one is that it offers music and sound effects that can make your video look creative. Fourth and the most loved one is recording your audio and video both in between the screen recording. Aren’t these enough to convince you to give them a try?

These were the useful software for windows we wanted you to know about. Each of them varies in price and functionality. But I am confident about the fact that none of them is free from exciting features. You can install them easily. You might feel skeptical putting money for the paid ones. But let me assure you one thing that each one of them is worth spending your money on.